What happens when a post on a social media website goes viral and it is not in your native language? How would it be if you want to sell a product, although you do not have knowledge of the local languages of all the communities in the region you wish to target? Failing to overcome this language barrier could be perilous for your business.

Needless to say, social media by far is the quickest and the best way to spread your message.  They are built particularly to focus on a global audience, which means keeping in mind all the linguistic groups and their interests.

For some people, the use of a translator may sound tempting, however, it does no good in the long run as translation apps cannot simply help you in cutting down your customer services and brand marketing. Not paying heed to complaint simply because it is in some other language does more bad than good to your brand. Perhaps, social media can be credited as a benchmark for global connectivity throughout the world. The economic, social and political aspects of a region cannot be overlooked and the ever increasing demand of social media in today’s world with its broad audience base helps achieve this development.

Famous social media platforms such as Twitter and Facebook have achieved worldwide recognition, and have set a standard through their hasty multilingualization for others to follow. 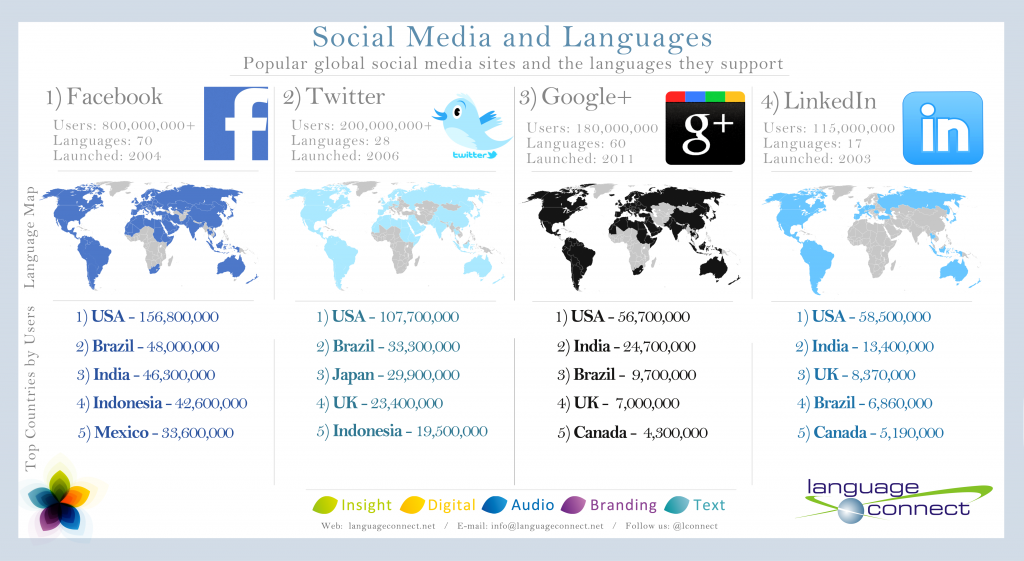 Popular social media and the languages supported by them

In the present realm of communication where swift shifts are occurring, it is true that there has been emergence of new types of social activities. However, not being able to communicate, sadly leads to emergence of a miscommunication barrier that seems to broaden with time.

Interestingly, popular social media websites have realised over time that linguistic barriers are to be overcome immediately. In fact, most of your networking sites are even better off than humans and communicate in as many languages as one could have ever wished for. A recent survey was conducted on the number of languages supported by social media that gave the following results. The data also showed that USA being a country had the maximum users for Facebook, Twitter, Google+ and LinkedIn.

–          Facebook once again, has proved its mettle with more than 800 million-plus users enjoying its services with the maximum users from USA (156,800,000). Launched in the year 2004, its network supports as many as 70 languages with plans of incorporating more languages in the future. The survey has also revealed that Brazil came second with around 48 million Facebook users. This was followed by India and Indonesia with around 46 million and 42 million users each. A technologically advanced country such as Mexico was a little behind the two, with only 36 million users in its kitty.

–          With an average of 200 million users, Twitter, launched in the year 2006 comes in more than 28 languages. USA was once again, ahead of the trail with a little over 100 million users connected through Twitter. Brazil once again came next with 33 million users in the country that loved spending time on this micro-blogging site. This was followed by Japan and UK which have approximately 29 and 23 million users individually. Indonesia stood fourth with a whooping 19 million users on Twitter.

–          Considered to be a novice and an underutilized network, Google+ was launched in 2011 and till now, has merely 180 million users connected through it.  Although the network supports over 60 languages, yet it has failed to gain as much acclamation as its counterparts, Facebook and Twitter. Its maximum users are once again, from USA and this data was followed by India that had 24 million users associated with Google+. A few countries such Canada and UK have 4 and 7 million users on Google+ individually.

–          Considered to be a business oriented website, LinkedIn is essentially for those who wish to strengthen their business ties and network.  Launched in 2003, LinkedIn has a total of 115 million followers. It also supports a mere figure of 17 languages, yet it has shown tremendous development lately.